Until I was diagnosed with Papillary Thyroid Cancer in March 2000 I had no idea that it existed.  To be honest I never gave much thought to what a thyroid was and why we needed it.  I now find it amazing that we take such a crucial gland for granted.  As a whole, people know very little about protecting the health of this gland.


In March 1999, I had my annual physical with my OB/GYN. He noted that my thyroid was swollen but made no further reference to me needing to have it checked or change anything in my diet to correct it. So I brushed it off as a casual comment. One week later I would find out that I was expecting my first child.

My son was born by C-section on November 5, 1999.  He was a healthy baby boy and the joy of my life.  Six weeks after he was born I had some bleeding issues and was referred to a gastrointerologist for some testing.  Both my father and grandmother had died of colon cancer so we were cautious.  During this exam he did a lymph and thyroid gland check.  He asked me if I was aware that my thyroid had a cyst on it.  I told him that I had been told earlier that year that it was swollen but did not know that it had a cyst on it.  I told him that I would have my doctor check it at my 6 week postpartum check up.  My OB/GYN also found the issue and sent me for an ultrasound.  The results came back a complex cyst.  He then sent me for a Nuclear Medicine Scan using I-123.  This scan came back with information that was also inconclusive as to what these nodules on my thyroid were.  So my doctor referred me to an ENT. 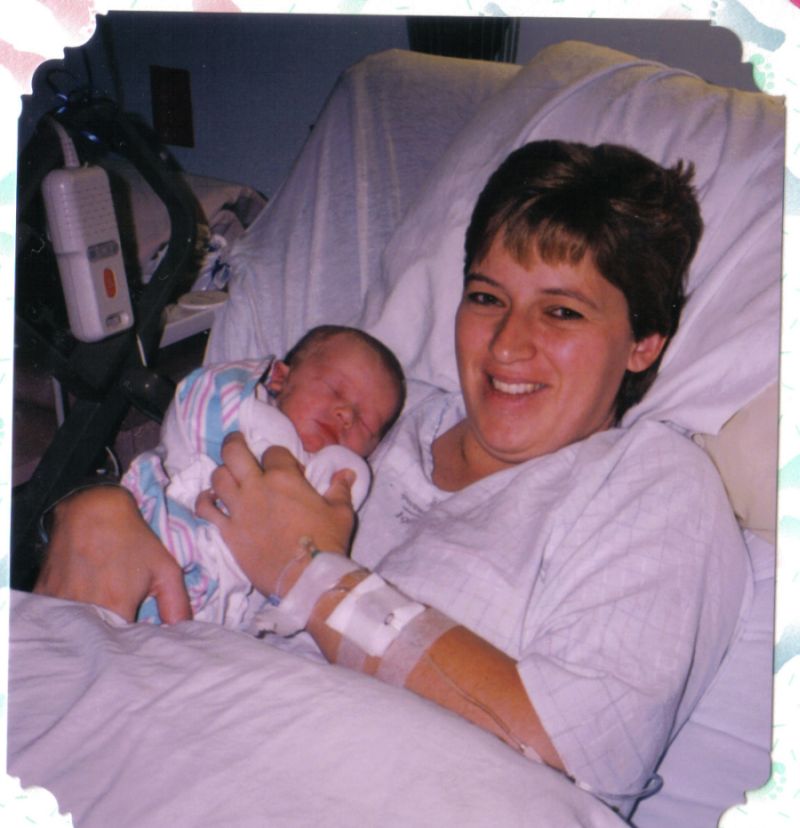 The ENT scheduled a fine needle aspiration (biopsy) to check what the nodule was. The results were abnormal follicular cells. The ENT told me that he thought we should take out the right lobe just to be sure - but it was probably nothing. So on March 1 I was brought into the OR to have it removed. When I woke up I was told that 3/4 of it looked bad so they took it out and left me with1/4 of my thyroid. I was told that it may be enough for me but that if it wasn't able to make enough thyroid hormone I would take a little pill for the rest of my life and be just fine.

Ten days later when I went to have my stitches removed my doctor commented on how he needed to grab the pathology report. He walked into the room and began to read it for the first time. He fell against the door and said "I am sorry". I thought "for what?" He told me that the report said that I had papillary thyroid cancer and it had spread to my lymph node. I said nothing and he commented on that. I don't know what you are supposed to do in times like this. I just looked at my 4 month old son in his car seat on the floor and couldn't believe that this was my life. I went to my car and lost it. I returned on April 12 to have the remaining 1/4 removed and then on May 26 I was given 103 mCi's of RAI. On January 19 of the following year I was given another 150 mCi's of RAI for a still registering Tg level. Then on April 15, 2005 I received news that I had to return again for RAI treatment. This time it was 250 mCi's putting me over my maximum lifetime dose. My life spiraled downward quickly from there. My health never improved and I was desperate for answers. Then I discovered the beauty of Holistic Medicine. I had to gather my courage and drop all conventional medicine had tried to teach me. I wanted to live and since I was facing Ext Beam radiation due to increasing Tg levels I figured what could I lose because I was convinced that the Ext Beam would kill me. I drove 2 1/2 hours to a doctor that I had heard about 4 years earlier. I have been with him for almost 2 years now. I cannot express to you how grateful I am for what he has done for me. He looked at me as more than a thyroid - but a whole person. His first round of labs checked every system in my body. They drew 17 vials of blood. Not once has he discounted how I felt. I came to him with a list of 23 symptoms that my Endo had told me were "not his problem as they were female and he did not deal in female issues". I have managed to bring my Tg levels down 10 pts with the change from Synthroid to Armour and the addition of Iodoral ( a pill form of Lugol's Iodine) and a balancing of my nutritional levels and hormones. The change has been amazing and for the first time in years I feel fantastic. Thank you dear Lord for leading me to this man. To read my entire story you can access it in my BLOG where I have documented my journey in detail. My prayer is that it will guide you and help you to find the answers you are searching for to improve your health - no matter what you suffer with.